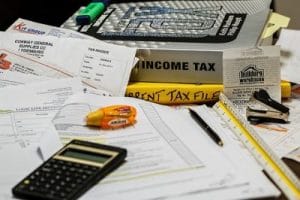 When You Don’t File Your Tax Return

Not filing taxes can lead to serious consequences from the IRS, including penalties, interest, seizure of assets, and criminal charges. The IRS will aggressively seek the money it thinks it is owed. For delinquent taxpayers, the sooner they respond to notices regarding unfiled taxes the better.

What Happens When Taxes Are Not Filed?

When the IRS discovers that a taxpayer failed to file, the agency will send notices in the mail that taxes have not been filed or that there is a tax debt due.

In some cases, the IRS may file a Substitute for Return (SFR) on the behalf of a taxpayer who has not filed a tax return. This is not done as a courtesy for delinquent filers. Instead, the tax return that they will file will not include any exemptions, deductions, or tax credits. The SFR may show that a tax liability is owed even when a refund would typically be due. After completing the SFR, the IRS will send a collection notice to the taxpayer to notify that an SFR had been filed and taxes are owed.

There is no limit to the amount of time that the IRS may continue collection efforts. Penalties and interest charges can quickly add to the balance of taxes owed. The IRS may:

Does Everyone Need to File Taxes?

Taxpayers with incomes that fall below certain thresholds may be exempt from filing taxes. However, that does not mean they should not file. They could be missing out on Earned Income Tax Credit and other tax credits that would result in a tax refund.

The IRS does have mechanisms in place to assist taxpayers who are required to pay taxes. If a taxpayer is unable to file his taxes by the due date, it is possible to request a six-month extension. But this extension does not extend the time to pay taxes that might be due. When taxpayers cannot pay taxes that are due, it may be possible to make a payment arrangement or file an Offer in Compromise when there is a financial hardship.