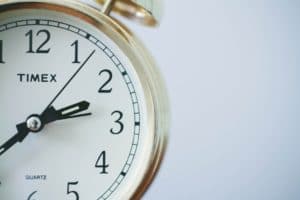 Overcoming procrastination about impending issues (such as taxes)

It’s a natural human tendency to procrastinate. After all, life for homo sapiens used to be a lot simpler. In a hunter-gatherer world, there were clear signals about when to take certain actions. Getting out on the hunt and avoiding threats from predators were in-the-moment experiences, triggering fight or flight responses.

Today, however, things are a lot more complicated. Issues that affect our lives often play out over a pretty long period of time. And that can make it difficult to get started with taking action in the present. It can be easy to procrastinate – even when taking action can make your future better.

In this post, we will a tip on how to avoid or get beyond procrastination. And we will apply this tip to tax compliance.

Why it’s easy to procrastinate

People procrastinate for many reasons. One is that it’s difficult to connect the longer-term consequences of putting something off with the short-term relief of not having to deal with it.

In part, this relates to evolution. If you were living in prehistoric times and a saber-tooth tiger were charging at you, procrastination would not be an issue. You would have to act.

It’s a lot different, in a modern society, when the threat is IRS collection action. To be sure, being in tax debt and have other tax issues can have serious consequences. But IRS actions such as a tax lien aren’t something that happens immediately. There is a gap of time between your action (or inaction) and the IRS’s response.

A recent study by two psychologists explored the question of how the time differential between actions and consequences affects motivation to take action. The psychologists found that people are more likely to prepare for seemingly far-in-the-future events if they measure the time until those events in terms of days, not months or years).

One of the tests used in the study involved test subject imaging they were parents with a newborn who needed to save for college. Half of the subjects were told that child would start college in 18 years; the other half was told it would be the same amount of time measured in days (6,570, to be exact).

Is there a possible takeaway from time-frame experiments such as this to dealing with your tax issues?

It may be that thinking in terms of more manageable time units can help to motivate action. For example, when the tax-filing season starts in January, the filing deadline (April 18 this year) may seem like a long way away. But if you measure it in days, it starts to get more real.

More broadly, avoiding or getting beyond procrastination involves thinking about time in a different way. It means thinking about the present and taking account of the past in ways that connect it in positive ways to the future.

For example, if you have tax debt from the past, it may be causing you anxiety in the present because of what might happen in the future. The future consequences of that debt, such as a bank levy or wage garnishment, may seem far off.

But if you took action now to address the debt, it can actually help you in the present too. You would not be so anxious and you would be positioning yourself well for the future.

In short, when it comes to taxes, it makes sense to think terms of your future self, not just your present self. And a skilled tax attorney can help you respond, regardless of whether you have received an IRS notice about tax problems or not.