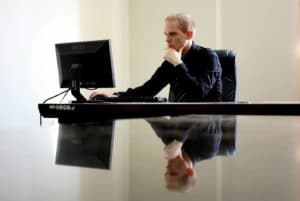 A recent article in Bloomberg Businessweek indicates that some people may actually forget to file their tax returns. It seems more likely that the non-filing is due to a lack of funds to pay what is owed to the IRS. As suggested on this blog in the past, the best procedure is to file the executed tax return, even without enclosing the amount due or by enclosing a check for a partial amount. Whether the taxpayer is in Nevada or another state, this procedure may stop certain penalties and will be at least be a showing of good faith.

Procrastination with the IRS is generally a poor strategy, usually resulting in a higher tax bill. Additionally, the more the problem is ignored, the closer the taxpayer is to collection actions by the IRS. The agency can enter a tax lien that applies to all personal and real property owned by the taxpayer.

This prevents the taxpayer from disposing of property covered by the lien without a prior release from the IRS. The agency can also use bank levies to settle or partially settle tax debts. That simply means seizing whatever funds are in a person’s bank accounts. Wage or income garnishments are also possible. The Bloomberg article suggests that the taxpayer file the necessary tax return, even without payment enclosed.

That will at least avoid the $195 failure to file penalty. It’s also suggested that the individual pay as much as possible with the filed return. The IRS then sends a bill for the remainder. This may give the taxpayer up to two months to save up another payment to make when the bill is received.

The other typical IRS remedies include a payment plan or an offer in compromise. The offer involves a negotiated settlement for less than the amount due. This is a lot of paperwork but could be greatly beneficial. Whether the individual is in Nevada or elsewhere, the general principles of dealing with IRS debts remain generally the same. The bottom line is that it’s always best to confront a problem and resolve it rather than putting one’s “head in the sand,” which is generally a recipe for worse troubles down the line.

Source: Bloomberg Businessweek, “What to Do If You Forgot to Pay Taxes“, Karen E. Klein, May 5, 2014